Welcome to the landing page for the second part of the Hauser boys’ adventures on the Deep Frontier: The Lure of Space and The Stars Avail, which form a loose series with Snowburn and Throwing Fire.

The Lure of Space

Jon Hauser wakes in the wreckage of the Deep jumper, Vox Aurelia. With no memory of how he got on the Vox, or why he would have been shipped to Maia Colony, Jon must discover the truth behind his relocation.

Finding an unlikely ally in the Vox’s cybernetic pilot, Darienn, Jon unearths the ugly truth behind the “garden” Colony. But even as Darienn and Jon plan to escape the Colonists’ brutal plans, it may be too late. Maia’s worst and most deadly secret is on the rise.

And here’s an excerpt from the first chapter:

Darkness. And the taste of blood.

I turn my head and spit. Something slimy. Not blood. Or not just blood. What the fuck’s in my mouth? Tastes recycled.

I blink. Still dark. Pigs must’ve moved me. New cell’s darker than the old one. No line of yellow seeping under the cell door. No faint blue glow from the A-Eye in the ceiling. Real darkness. Pressing hard against my eyeballs.

I stretch. Testing. Constriction at my wrists and ankles. Something tight across my chest. Doesn’t feel like metal, and when I give it a hard tug, it gives. Not a restraint. Where’ve they got me? Medical? Did they fuck me up again? Last thing I remember is turning in after a couple of hours playing v-Go in my cell. Fucking A-Eye was beating me. They gas me while I was asleep and work me over? Wouldn’t be the first time. If they did, I’ve been out a long while. I’m not even sore.

I yank against the restraint on my right wrist and it gives with a tearing sound. I finger the torn edge. Frayed. A woven strap. They haven’t made any effort to lock me down.

I free my other wrist, then my ankles. The strap across my chest feels different. Smooth and slick under my fingertips. It comes away from my skin with a slurping sound, a sense of suction. Like it was attached to me. I pull the loose end up to my face. Nothing. Can’t see a thing. Not even right against the tip of my nose. I can smell something, though. Recycled, stale, putrid. Like the goo in my mouth.

I sit up slowly, one hand held above me. Nothing but air. Finally, high above my head, a curved surface. Cool. Glassy. I follow it with my fingers. It arches back over my head, ends in a thick angle. I feel my way across to a metal rim. Fingertips pressed against icy metal, I trace the rim until I have the contours in my mind. Oblong. Two meters by one meter. I’m sitting in an open pod.

I stretch my senses. I can’t see shite, but I can hear, and feel, and smell. Better than any Neem.

Wherever I am, it ain’t Reek. It’s quiet. Almost eerily quiet. Some faint, distant ticking sounds, but none of the usual noise. No footsteps. No shouting. No screams. My breathing’s the loudest sound. And none of the other sensations of Reek. No constant breath of recycled air across my skin. No smell of piss and rock dust. There’s a whiff of sweat, an antiseptic edge, broken metal, an earthy smell.

I take a deep breath. Dirt. I haven’t smelled real dirt in years. Not since I was shipped to the Moon. Didn’t know until just now how much I missed it.

I find the edge of the pod and reach over. A long way down, my fingertips brush something cold and solid. Floor. I haul myself out of the pod. Land heavily. More gravity than I’m used to.

Standing makes my head spin. Like I haven’t been upright in a long time. I crouch next to the pod, waiting. A siren. An alarm. The cool voice of the A-Eye telling me to get back in the pod. Nothing. Just my breathing and the faint, distant ticking. Now and then, a soft rustle, like something caught in an air vent. Nothing else.

When it sinks in that nothing’s going to happen, and my head stops spinning, I feel around. Floor slopes away slightly under my toes. Bad angle. Hard to get my balance. A meter across the canted floor and my hand bumps into another curved, glassy surface. I trace the long arc. Two meters long. A meter wide. Another pod. This one’s closed. Square shapes set into the side could be controls, but nothing happens when I press them. I give the pod an experimental rap with my knuckles. The sound echoes in the silence.

I move around the pod, taking shuffling steps. Afraid to come down hard on anything sharp. Feels like I’ve got Reek standard-issue peds on my feet, but stepping on something sharp in the dark ain’t the time to find out. A meter to the right, another curved, glassy surface. I shuffle forward, one hand held at waist level, the other in front of my face. More smooth, glassy surfaces under my hand. More pods. In my mind’s eye, they stretch away on all sides. Rank after rank. A field of silent, closed pods. Sitting in darkness. In silence.

Where the fuck am I?

The second book in the duo, The Stars Avail, takes Jon Hauser’s rebellion interstellar and reunites Jon with his cousin, Hale Hauser.

Here’s an excerpt from the first chapter:

Darienn’s voice. Silver and smoke. “Are you sure about this?”

Another voice. “You programmed the namites yourself, Sil. Let’s get started.”

I didn’t expect dying to hurt so bad. My skin’s on fire. Seers all the way to the bone. I’m burning, burning.

“God, they’re eating his eyelids. Are you sure about this?”

Light. Searing and shapeless. The firestorm.

“His blood pressure’s jumping. One-sixty over ninety. Col, are you sure he can’t feel this?”

My mind retreats into darkness.

I’ve also been posting backstory about the Deep Frontier and the A.I. Rebellion on my Facebook page and in my reader group, EJ’s Angels and Demons, on Facebook and MeWe. Meet me there for extras and updates about Jon, Darienn and the Deep Frontier! 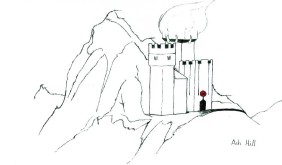